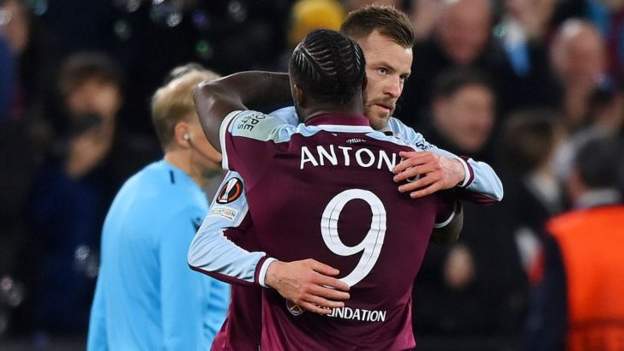 Andriy Yarmolenko scored an emotional extra-time winner as West Ham overturned a first-leg deficit against Sevilla to reach their first European quarter-final since 1981.

Yarmolenko has been on compassionate leave as he tried to deal with the trauma of having friends and relatives back home in war-torn Ukraine.

But after making a goalscoring return to the pitch against Aston Villa on Sunday, Yarmolenko swept the Hammers past Sevilla as he converted a rebound after Pablo Fornals’ low shot had been parried into his path by visiting keeper Bono.

The 32-year-old forward, on as a substitute for Said Benrahma, looked to the skies as he marked his special moment and the London Stadium erupted in jubilation.

At the final whistle, he looked almost bewildered in the moment before spotting a fan with a Ukraine flag and handing him his shirt.

Trailing by a single goal from last week’s opener in Spain, Tomas Soucek had pulled West Ham level in the first-half when he guided Michail Antonio’s cross into the far corner with a precise header.

A Sevilla side that has won this tournament four times out of the last eight seasons were a major disappointment – and came no closer than Youssef En-Nesyri’s early effort which was brilliantly saved by Alphonse Areola.

West Ham manager David Moyes had billed this as the tie of the round. The Scot must now be immensely proud at the way his side have navigated their way into a draw that contains, among others, Barcelona and Rangers.

The last time Moyes managed a team in the last 16 of a European competition, he secured probably his best night as Manchester United manager, when his side came back from a 2-0 first leg deficit to knock Olympiakos out of the Champions League.

As on that night, Moyes’ side had levelled the tie by the interval.

West Ham controlled the tempo of the game despite having a minority of possession.

Fornals and Declan Rice were outstanding in midfield, young defender Ben Johnson superb in a determined defensive display and Antonio – a doubt before the game – ran so hard up front that Sevilla could never rest.

In contrast, Anthony Martial was a disappointment on his return to England and, by the end, Sevilla Julen Lopetegui seemed to have run out of ideas as his side tried to claw their way to penalties.

Sevilla had not lost a European tie after taking a first-leg lead since 1981. Yarmolenko changed that history in a moment for Ukraine to be proud of, in a dark time at home.

A statement night for London Stadium

West Ham have not had a seamless move from their beloved Boleyn Ground to the London Stadium.

However, this game exploded the myth that there is a lack of atmosphere at the stadium solely because of the running track which, in any case, is reduced in its impact since the stands behind each goal were squared off at the start of the season.

There was no lack of atmosphere on this occasion, a game, West Ham said, was played in front of the highest number of club supporters ever to see a match.

The build-up was heightened by a pre-match light show. The bubbles floated into the night sky and when Soucek’s header found the far corner in the 39th minute, the place erupted.

Celebration was replaced by tension the longer the game went on.

But when Yarmolenko struck the decisive final blow in the 112th minute, the home fans turned up the volume once more.

London Stadium has waited six years for a statement night to go alongside the memories that were left behind in the three-and-a-half mile move.

Now they have one. And on this evidence, the journey might not be over yet.