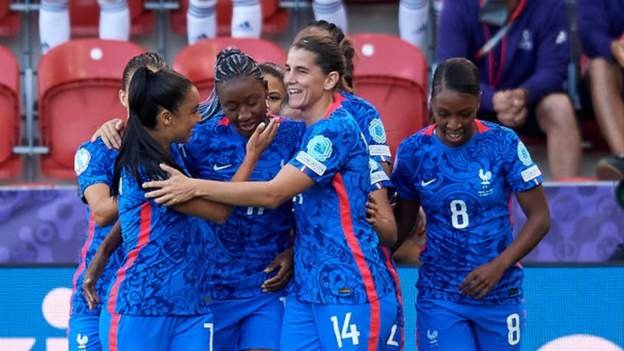 France breezed into the Euro 2022 quarter-finals with a game to spare by beating Belgium at Rotherham’s New York Stadium to progress as Group D winners.

Corinne Diacre’s side followed up their 5-1 thrashing of Italy with another impressive attacking display that should have seen them win by a bigger margin.

Kadidiatou Diani – one of France’s standout players so far – opened the scoring in the sixth minute when she headed in Sakina Karchaoui’s cross.

All five of France’s goals against Italy came in the first half and it looked like a repeat was on the cards as they continued to put pressure on the Belgium defence. Delphine Cascarino hit a shot from range just wide before an effort from Diani was pushed on to the post by goalkeeper Nicky Evrard.

Not even the loss of Marie-Antoinette Katoto to injury could halt the French attacks, although her early departure will be a cause for concern as they look to win a major tournament for the first time.

Belgium stunned their opponents as they equalised out of nowhere nine minutes before half-time when the ball was squeezed through to Janice Cayman, who prodded home from inside the area.

But France restored their lead five minutes later when Griedge Mbock Bathy sent a bullet of a header into the back of the net from Clara Mateo’s cross.

Despite their dominance, France were unable to add further goals after the break, even when they were awarded a late penalty when Amber Tysiak was adjudged to have handled the ball after a VAR review. Tysiak was shown a second yellow card but Wendy Renard’s spot kick was saved.

Ultimately, another goal was not needed and securing top spot means France will play the runner-up in Group C. The Netherlands currently top that group, with Sweden in second place.

There is no doubting the quality of this France attack as they once again opened their opponents up with ease, particularly in the first half.

This was not as emphatic a win as in their opener but it could have been if not for the woodwork and had their finishing been better.

The loss of Katoto is undoubtedly a concern but the strength of France’s forward play is through the wide areas and Diani and Cascarino were a constant menace on the flanks.

But despite scoring six goals and conceding just two in their two matches so far, they are yet to score a goal in the second half of a game. Why they are unable to maintain their intensity after the break is something boss Diacre will want to address as they now prepare for the knockout stage.

Belgium fight will give them hope

Few of the Belgian press at the New York Stadium gave their national team much chance of upsetting a France side that tore apart Italy, with their focus on getting a result in their final group game against the Italians next Monday.

However, they will take confidence from this performance.

For the second successive game they fought back to equalise and although they could not hold form to take a draw, they showed impressive fight against one of the tournament favourites.

Rate players out of 10 throughout or after the game. The rater will close 30 minutes after the final whistle.

Rating range key1 = Give it up10 = Pure perfection